Physics students (full or part-time), and anyone who holds a physics degree working in Canada, who self identify as Black, African Canadian, African Nova Scotian, or of Black/African descent are invited to talk with a panel of Canadian physics faculty and postdocs, during the CAP’s Black in Canadian Physics networking meeting which will be held on Friday, October 30, 2020 from 14h00-15h00 EDT.

Click here to register and receive the link to Zoom on Oct.30th. 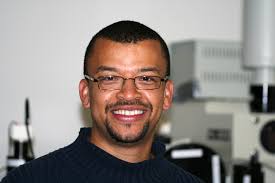 Dr. Hewitt is a full Professor in the Department of Physics & Atmospheric Science, and Chair of Senate (2015-) at Dalhousie University.  In his Molecular imaging lab (https://hewitt-lab.com/), he has developed novel nanoparticle probes for cancer imaging and treatment, new optical imaging approaches and a prototype medical diagnostic tool.

An account of Dr. Hewitt’s life must begin with recognition of the powerful influence of his late mother who raised four children as a single parent, to value family, community and hard work.  Kevin was initially raised by his grandmother in St. Vincent and the Grenadines, until the age of ten, when he reunited with his mother who had originally moved to the UK in search of employment in nursing with the Windrush generation ( https://www.lbhf.gov.uk/community/windrush-day-honouring-british-caribbean-community/windrush-generation ).  His mother was heavily involved in Toronto’s black community, and Kevin began serving his community as a counsellor at the Harriet Tubman summer camp.  As an undergraduate student at the University of Toronto (UofT), where he was the first African Canadian to win the UofT-Scarborough College Physics prize, he established tutoring programs for students while leading the African Caribbean Students Association.  While at graduate school at Simon Fraser University, Kevin co-founded the Association for Students of African Descent and the St. Vincent and the Grenadines Association of Greater Vancouver.  He has African and Carib roots and is discovering his Garifuna ( https://ich.unesco.org/en/RL/language-dance-and-music-of-the-garifuna-00001 ) identity.

In the final year of his graduate degree he unified his deep and abiding interest in science, African and Caribbean culture, and community outreach by establishing a one-day science program for K-12 students —  Imhotep’s Legacy: African Canadians in Science – A Family affair with the theme, ”Seeing is Believing…?”.  At Dalhousie University, Kevin built on the success of the one-day science program by co-founding in 2003 the Imhotep’s Legacy Academy (https://www.dal.ca/faculty/science/imhotep.html), an award-winning provincial STEM outreach program for African Canadian students from junior high to university ( https://www.dal.ca/news/2013/05/30/from-promise-to-potential.html ).  He created a mobile Holography tent to tour the province in celebration of the World Year of Physics (2005), in which thousands of Nova Scotians were able to make their own holograms.

His contributions have been recognized by a Youth Community Service Award (1999), the Harry Jerome Award for Professional Excellence (2014) and the Nova Scotia Discovery Centre Science Champion award (2018). He is featured in COOL BLACK NORTH ( http://coolblacknorth.com/ ), a 2019 documentary which explores the unique and vibrant Canadian Black Community and its role in our country’s contemporary identity.

Most importantly, he is proud of his four thoughtful, brilliant, and beautiful children: Anika, Lishan, Zeré and Sanea.